Although Hamirpur is a small town with a total area of 5.2 Sq Km it has made a name for itself in different streams of sports. May be that is because the percentage of youth is quite high here. Moreover, the area has always produced brave worriers. It is natural that such a place will also produce distinctive sports personalities. In addition, presence of renowned educational institutions may have helped to build up a culture of sports in Hamirpur.

Furthermore, such enthusiasm for sports is not limited to the town only; it can be felt in every nook and corner of the district. From wrestling to cricket, sports persons from Hamirpur district are seen to participate in all kinds of events. Let us next look into the various disciplines of sports one by one.

It is said that football is played by twenty-five crores players in more than two hundred countries. No doubt, in Hamirpur too, the sports will have a large number of followers. The Hamirpur Football Association, a subsidiary of Himachal Pradesh Football Association, represents the footballers of the district. The association not only arranges local football matches in different levels, but also sends football teams to different state level tournaments. Moreover, coaching classes as well as practice matches are held regularly so that players never lose touch with the game. 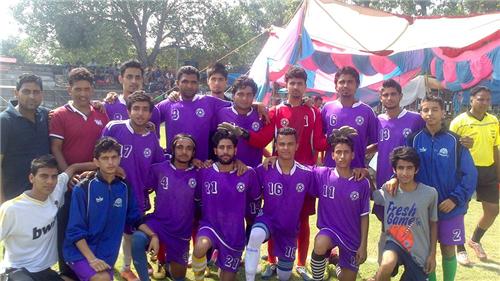 Apart from regular teams, there is also a Veteran Team, which actively takes part in different tournaments. In February, 2014, this team won the league by beating the Kangra Veterans.  Moreover, school level matches are regularly organized in Hamirpur. The association keeps watch over the budding talents and helps them to hone their skills so that they can one day become professional footballers.

Just as rest of the sub continent, the people of Hamirpur are avid followers of cricket. To honor their enthusiasm for the game, the Cricket Association of Himachal Pradesh has built an international-level cricket stadium in Nadaun, located at a distance of 27 Km from Hamirpur town. Built at the cost of Rs. 5 crore, this stadium has been named after former Prime Minister Atal Behari Vajpai. After Shimla and Dharamhala, the Nadaun stadium is the third of its kind. 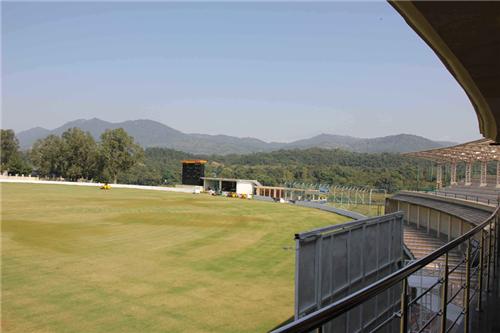 The stadium has seven pitches of international standard. The clay for these pitches has been brought from Rajkot while the grass has been imported from Ghaziabad. These pitches are so made that matches can restart within half an hour of rain and hence games need never be abandoned because of soggy ground condition. Right now, the stadium can hold three thousand spectators, but the capacity can be increased if the situation so demands.

Hamirpur has also produced a few reputed players. Indeed people here are as enthusiastic about watching a good game of cricket as they are interested in playing the game. The educational institutes of this area have their own cricket teams and intra school matches are held regularly.

Some Other Sporting Events in Hamirpur

Different types of outdoor and indoor games such as lawn tennis, basket ball, volleyball, table tennis etc are played regularly at different educational institutes as well as clubs. Competitions to encourage participants are also held regularly. However, there is also a plan to build a tennis court as well as a shooting range of international standard in near future. 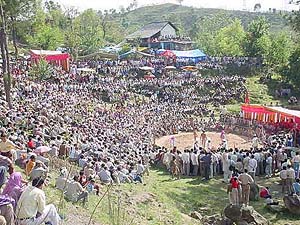 Indigenous sports such as wrestling, boxing. Kabbadi and athletics are also encouraged in Hamirpur. Popularity of wrestling as a sport is evident at the ‘melas’ organized to mark different religious or historical events. Indeed, wrestling competitions organized at such melas draw a huge crowd.  A three-day state level boxing championship held in September in 2013 also attracted more than hundred participants from across the state. Kabbadis and athletics too are regular features at different sporting events of the district.

Apart from regular sports, Sujanpur and Nadaun also offer scope for adventure sports. While one can try paragliding from Sujanpur, Nadaun offers ample scope for water sports such as angling and white water rafting.