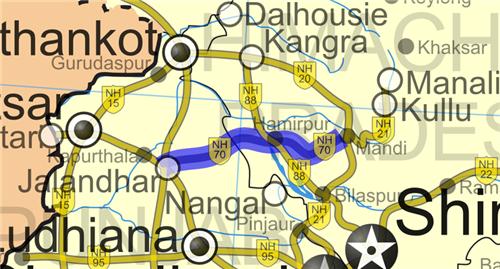 Hamirpur is a unique town. Although its total is only 5.2 Sq Km, it has six major roads passing through it.  In fact, it can be said that the town has grown around the junction of these roads. What is more, two of these roads are national highways while two are state highways; the rest are district roads, connecting various parts of the district with its headquarters. We will now look into each of these roadways separately.

NH 70 runs from Mandi to Jalandhar crossing NH 80 at Hamirpur.  The road is often referred as the Jalandhar-Mandi Road. Starting from Mandi, the highway passes through Kotli, Dharampur, Tihra,  Awahdevi, Taunidevi, Hamirpur,  Nadaun, Amb, Mubarikpur, Gagret and Hoshiarpur before it culminates in Jalandhar.  Therefore, we can see that this road connects Hamirpur to Mandi and Manali on one side and Jalandhar on the other.

NH 70 joins Hamirpur with Amb, which is the nearest railhead; therefore, it is a very important road for those who want to avail the railway service from there. Moreover, the road passes through an important area of the town. Many administrative buildings such as the Office of the District Commissioner, the District Court, BSNL Telephone Exchange, All India Radio etc are located on this road. Moreover, banks and other commercial establishments are also housed on NH 70. Many educational as well as cultural activities are also held along this road.

Unlike NH 70, which is an interstate highway, NH 80 runs entirely through Himachal Pradesh. It starts from Shimla and runs through the following route to culminate at Kangra:


It is to be noted that NH 88 is also known as Shimla-Kangra Road and Shimla-Dharamshala Road.  It runs through the heart of the town. Most of the town’s major markets are located along this road and consequently, this road also experience major traffic movement. Some important buildings on this road are the historic Tehsil Office, the interstate Bus Terminus, the Zonal Hospital, Fire Station etc. The Hamirpur ground too is located along this road.

Himachal Pradesh State Highway numbering 39 is also another important roadway. The road starts from Palampur in Kangra and passes through Sujanpur Tira before it joins NH 70 at Hamirpur near Anu. On the other hand, HP SH 32 runs from Una to Mandi crossing Hamirpur in the midway. Passengers wanting to avail the railway service from Una have to take this road.