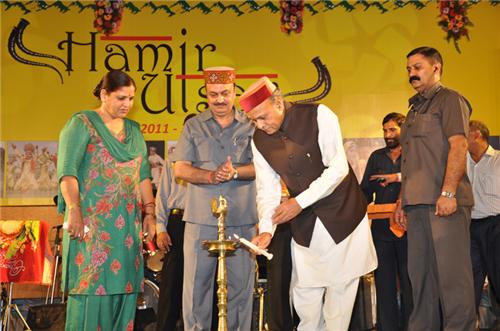 Fairs and festivals are a way of life for people Of Hamirpur. Most of these fairs are centered on some religious places and are organized by the temple authorities. Baba Deotsidh, Gasota Mahadev, Ghasian Fair etc fall under this category. On the other hand, some are organized by the state; the Hamir Usav at Hamirpur falls in the second category.

As we have already stated, Hamir Utsav in Hamirpur is a state sponsored event. It is held in the first week of November to commemorate the creation of Hamirpur district. This two-day state festival is one of the most important events in the calendar of this town. It is attended not only by common people of this region; dignitaries from state capital Shimla also make it a point to visit this fair.

In fact, people from across the state come here to attend the programs and enjoy themselves. One can see men and women in traditional attire moving around gaily, visiting the different stalls and enjoying themselves. The beautiful backdrop of the town along with the perfect climatic condition of the season adds to the charm of this fair.

The Cultural Aspect of Hamir Utsav

It is to be noted that Hamir Utsav is not only about entertainment and fun. It also has a cultural, economical as well as social relevance on the life of the people here. The fair showcases the cultural heritage of the district by holding different programs on local folk arts such as gidhas, chanderwalis, jatras and jheras. Panjabi songs and dance are also part of this cultural extravaganza. Along with local talents, artists from different parts of the district also take part in this function. People from far off places come here to watch these programs and enjoy themselves.

Since wrestling is the traditional sports in Hamirpur, a wrestling championship is also held on the second day of the fair.  Along with the local participants, wrestlers from outside the state also participate in this competition. The winner generally gets a memento and certain amount cash from the Utsav organizers. As is the practice, the chief guest hands over this prize on behalf of the organizers. 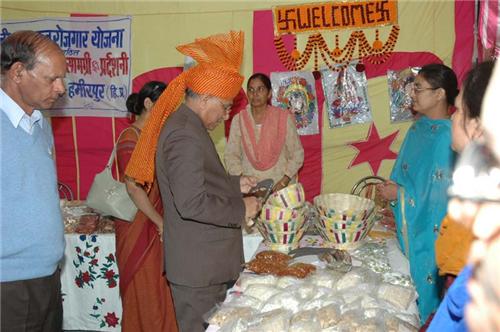 However, these programs are only a part of the attraction for a vast majority of the visitors. Temporary stalls, set up by the state as well as the private entities, draw a big crowd. Most of these stalls do brisk business and earn good profit. Among these stalls, shops selling sweets standout from the rest. The sweets sold by these shops are of local variety and have a unique in taste and sight. Therefore, every visitor to the fair should taste these sweets at least once. In fact, if anyone is interested in sampling local cuisine, he/she ought to come here during this Hamir Utsav.

The Social Impact of Hamir Utsav

The social impact of this festival is no less significant. Since thousands of people gather at the Utsav ground, the Himachal Pradesh Government seizes this opportunity to showcase socially relevant issues such as health and hygiene, education, deforestation, water conservation etc.  They hold exhibitions as well as skits on different issues that touch our lives directly or indirectly. Thus they try to bring about a social revolution and improve lives of the people using this festival as a platform.

Although religion does not officially play any part at Hamir Utsav, in this Dev Bhumi, no festival is can be complete without offering homage to the All-Mighty. Therefore, we see people from far and near offering homage to their beloved Lord at the local Shiv Mandir and praying for peace and prosperity of the town.  Thus we can conclude that, this two-day extravaganza leaves no part of the life untouched; it enriches every aspect of it make it more relevant.

Explore more about Culture of Hamirpur