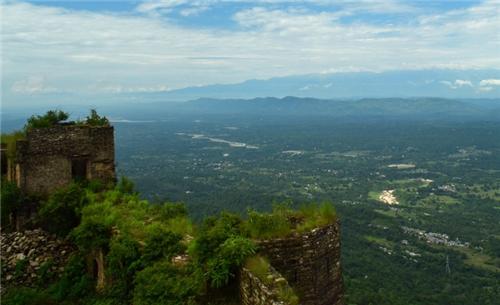 Hamirpur and Shivalik Range of Mountains

Hamirpur is located in the south-western part of Himachal Pradesh. Geographically, this area falls under the Shivalik/Shiwalik Range of mountains. The land here is made up of conglomerate rock formation, produced by the solidification of loose rocks as well as other materials that have been eroded from the Lesser Himalayan areas. However, in many places the soil is poorly consolidated.

It may not be out of place to mention that this mountain range was known as Manak Parbat in the olden days.  We do not exactly know why or when this range was renamed as Shivalik, but it may be interesting to note that the word literally means the ‘traces of Shiva’. True enough, Hamirpur is covered by thick vegetation, which does remind one of the traces of Lord Shiva. Pine forests are regular features of this land.

The average elevation of Hamirpur ranges from four hundred meters to eleven hundred meters. Tracts of flat land are also seen here and there.  As in the rest of Shivalik range, we can find many sub ranges traversing the region. Among them Jhak Dhar, Chabutra Hills and Sola Singhi Dhar need special mention. However, to get a fuller picture, we need speak about another mountain range first.

One of the major sub ranges of the Shivalik Mountains is Kali Dhar. It runs through Kullu, Mandi, Chamba and Kangra and finally enters Hamirpur district through its north-western border at Nadaun. On entering Hamirpur, Kali Dhar is renamed as Jhak Dhar and therefore, in reality, Jhak Dhar is actually the continuation of Kali Dhar.

On entering Hamirpur district, Jhak Dhar moves in the southeastern direction, thus cutting Hamirpur into two segments. The Hamirpur town is located to the east of this mountain range.  Here the landscape is rather undulating with a cover of thick vegetation. Pine forests are part of the features here.

However, if one moves towards the east as well as to the north east one will find bare rocks with deep ravines. Chabutra hills in the same region are another important hill range. It too is as steep as Jhak Dhar is and has the same kind of deep.

The third important range is Sola Singhi Dhar. It is said to be the longest mountain range of the area. It enters Hamirpur near Tappa Daruhi and then runs in a south-easterly direction. This makes Sola Singh Dhar more or less parallel to the Jhak Dhar. Another similarity is that, just as Jhak Dhar, this range too is called by different names in different district. Just as Jhak Dhar is known by the name of Kali Dhar in Kangra, the Sola Singh Dhar too is called Jaswan Dhar and Chintpurni in Una.

Flora and Fauna of Hamirpur

The area is especially rich in medicinal plants.  Beul, ooyi, kher, karal, shehtoot, amla, bahera, bil are some of the medicinal plants commonly found in this region. Other than that, different varieties of birds as well as reptiles also inhabit this area. Larger animals such as leopards, dogs, hare monkey etc are also found in the hills of Hamirpur. All these make Hamirpur rich in biodiversity.

Rivers and Khads of Hamirpur

The Hamirpur is watered by many big and small rivers.  Among the big rivers we have Beas and Sutlej. While river Beas runs through the northern edge of the district River Sutlej flows through its southern part. Kunha Khad, Sukar Khad, Man Khad are some of the perennial streams that run northward to mingle into Beas. In the south we have, Sukar Khad and Munkhar Khad draining into Seer Khad, which in its turn drains into River Sutlej. In addition, Hatli Khad and Jamli Khad are two other perennial streams; they run through Hamirpur town.

Hamirpur town is located at an altitude of 765 meters and is spread over an area of 5.2 Sq Km.  It falls under the subtropical climatic zone with an average rainfall of 124.8 cm. On an average the temperature varies between 42 degree in summer and 5 degree in winter. The hill slopes are cvered with 'Chir' pine forests. other than that, plants such as different varieties of bamboo, mango, cedrela, serrate are grow abundantly in and around the town.

Geologically Hamirpur town is located in a seismic zone IV and hence is prone to earthquakes. The soil here is a mixture of sandstone and clay; it is light brown in color and is prone to erosion.  Such soil erosion is increased when there is heavy rainfall in the catchment area of the Hatili Khad.

The town is drained by a number of khads or canals; among them Hatli Khad and Jamli khad carry substantial amount of water. Theses khads also form the boundary of the town. The Hatli Khad is a perennial stream. As of today, it is the main source of water supply for the town. However, there is also a plan to bring in water from River Beas, which forms the border between Hamirpur District and Kangra, in near future.