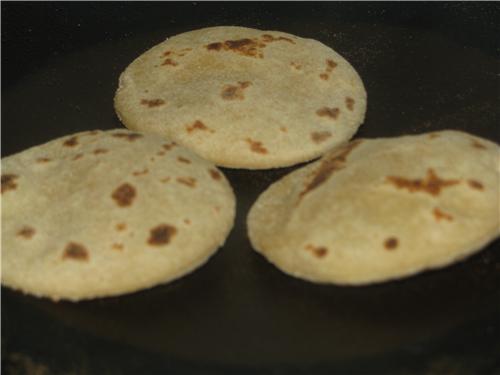 Before we start a discussion on the food in Hamirpur, we ought to take note of the fact that this area like rest of Himachal Pradesh is a hilly region. In early days, when transportation was not much developed, each village had to live on what they produced. Consequently, the local cuisine was basically restricted to the locally available food items. Fortunately, Hamirpur located in the lower Himalayas, has always grown different types of food crops and hence, cuisine in Hamirpur is as varied as it is rich in nutrition.

Let us, therefore, start with a look into the different food crops that grow in this region. In general, wheat, barley, gram and masur are grown in the winter while crops like maize, paddy, blackgram, kulth etc are grown in the monsoon. Apart from that, farmers also grow different kinds of vegetables and spinaches in their hilly tracts. Moreover, because there are enough pastoral lands milk is never in short supply. Consequently, we find liberal use of milk and milk products in the Hamirpuri cuisine.

It should also be noted that for a long time Hamirpur along with Kangra district was a part of Punjab province. Therefore, although the food in Hamirpur is basically Pahari, influence of Punjabi cuisine is quite prominent. That is why chapattis made out of wheat or maize along with sarson ki sag and lassi is a favorite food item in Hamirpur.

In spite of outside influence, Hamirpuri cuisine does offer different varieties of ethnic dishes. Among them, Bhatura, made out of fermented wheat flour, tops the popularity lists. It is either roasted or deep fried.  Generally it forms the staple diet of this region.  However, during festivals, a different variation of it is prepared. It is known as Beduan roti. To prepare the roti, the Hamirpuris first stuff it with a filling made out of soybean, black gram or mashed colocasia bulb and then fry it. 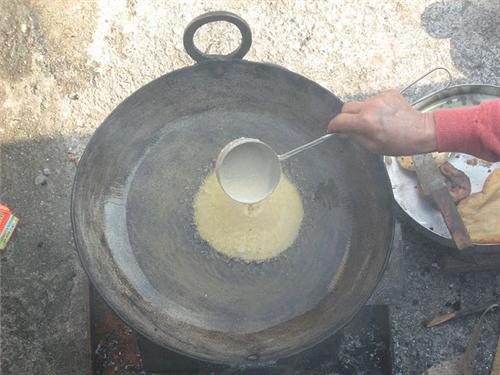 Rot is made is made from wheat flour dough and jiggery. Mithdoo or sancholoo is another popular sweet dish made from cereal. To prepare it sugar, grated coconut, ghee, aniseeds and water is added to wheat flour in a fixed proportion. The mixture is then kneaded to make dough, which is then rolled and cut into round shapes. The pieces are finally fried till they are golden brown.

Seera is another cereal based sweet dish. It is generally prepared during auspicious occasions such as pujas, weddings and birthdays. When girls in Hamirpur get married, they receive seera as a present from their parents. It comes in the form of starchy white solid balls made from wheat grain. It is generally stored in airtight containers for round the year use. However, seeras need to be cooked with sugar and ghee before they can be served.

Legume Based Food in Hamirpur 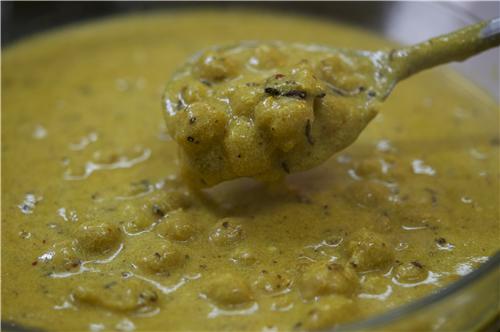 Among legume based dish, the first to come to mind is the pahari madra. To prepare the dish legumes such as chick peas, red kidney beans or black eyed beans are first boiled and set aside. In a separate pan cardamom, cinnamon, aniseed, bay leaf are first spluttered and then three cups of beaten yoghurt per one and half cup of boiled legumes are added. Once the ghee separates from the mixture, the legumes along with dry fruits and other seasoning are added. Finally, it is allowed to boil for twenty more minutes.

Mah ki dal ke pakoru is another favorite dish in Hamirpur. It is made from dehusked black gram dal, which has been soaked and ground.  Some other legume based dishes are badi and sepubari.

Khadi, khodu redu, jhol are some of the milk based dishes. While jhol is used as a summer beverage, others are consumed as a side dish. Redu is also used as medicine to relieve indigestion.

In Hamirpur many mouthwatering dishes are made from green vegetables, fruits as well as tubers. In addition, all these dishes are mostly made out of locally available ingredients and are highly nutritive. Among them, karalen ki sabji, lasiare ki sbzi, bhruni ki sabji demand special mention.

To prepare Karlen (also known as kachnar) ki sabji, the bud of the plant is first boiled and kept aside. In another pan, onion and garlic is first sauté in oil; next, turmeric, red chili powder, salt and finally the boil vegetable is added to it. It is then cooked for five to seven minutes. Once done, tamarind paste is added to it and cooked for another five minutes.

Lasiare ki sabji is made from the fruits of lasiare or lasora plants. These fruits are rather acidic and so to overcome it, it is first crushed, deseeded and then left to soak in salt water for three-four hours. Apart from making sabji, these fruits are also made into pickles.

Bhruni ki sabji is made from the tender leaves of the fig tree through a unique method called dhuni. To prepare the dish, the leaves are first boiled in an earthen pot. Next, the boiled leaves are made into paste; salt and green chilies are added to it; the mixture is then kept in closed container. Meanwhile smoke is created by pouring few drops of mustard oil on burning coal, which is then kept on the lid of the container. The fume thus created is absorbed by the dish to produce a typical smoky flavor.

Mango based Food in Hamirpur

Ambua, chacha, mahni are some of the fruit based dishes. They are mostly made out of locally available mangoes. Among them, ambua is used as food adjunct; it adds taste and nutritional value to the dish.  Chacha, made out of raw mango, is used as accompaniment to the main dish. Mahni is a semi liquid dish to be eaten with rice. 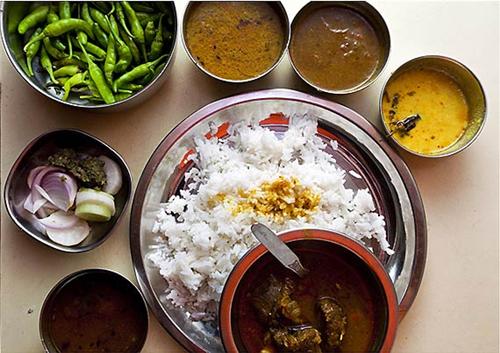 Dishes based on Tubers in Hamirpur

Colocasia or kachalu is used in different ways to prepare different dishes. Patrode is made out of the leaves of the plant. To prepare this dish, gram flour is made into paste and seasoned to taste. It is then spread over a colocasia leaf, which is then covered with another leaf. The paste is also applied to the second leaf and the process continues until it forms a thick layer. The pile of leaves is then tied up in a turmeric leaf and steamed. Once that is done, the leaves are cut into pieces and deep fried.

On the other hand, gharyali bhuji requires the use of leaves, stems as well as the bulb of the colocasia plant.  Al these parts are first sauté in oil and then boiled. Dried mango slices are added in the last stage to enhance the taste.

Fish and Meat in Hamirpur’s Cuisine

Fish is another item, which is in much demand in Hamirpur. The rivers and canals that flow through the district are home to different kinds of fishes. Consequently, the food in Hamirpur does not only consist of different types of cereals and vegetables, fish and meat are often included in the menu. In fact, to meet the local demand, the Fishery Department has to import it from neighboring districts.