Scholars are of the opinion that in olden days Hamirpur was known as Trigarta. We first find its reference in Mahabharata. It is believed that the Trigarta king, who sided with the Duryodhana during the Kurukshetra war, was actually king of Hamirpur. It is a fact that a thriving civilization used to inhabit this region long before the days of Mahabharata. It is natural that such an ancient civilization will have its culture rooted in legends and myths. Indeed, a great part of Hamirpur’s customs and traditions are based on folk literature, which has been handed down from one generation to the next.

Factors that influenced the culture of Hamirpur are manifold:

Folk Dances and Songs of Hamirpur

Indeed, Hamirpur’s culture, like its life, is simple, yet vibrant. On special occasions such as wedding, fairs and festivals, their inherent love for life comes out through dances and songs.  Gidha is a popular folk dance for the women while Chanderwali is dance form in which only the men can take part. Similarly, jetras are the folk songs sung by the ladies while songs sung by men are known as Jheras. In general, Jheras are centered on battles fought long ago.

Among the jheras, Gugga Chouha comes first in the popularity list. Gugga Chouha was a worrier king born of a Chauhan Rajput. In different states he is called by different names. In Hamirpur, he is worshipped as folk deity, who protects his followers from all kinds of ills.  Raja Sansar Chand is also another popular jhera sung by the musicians of Hamirpur. The Raja was one of the most popular kings of this region, who tried to regain the lost glory of the Katoch dynasty. Raja Bhangal and Raja Sirmour are also two other popular jheras.

In general, such songs and dances are accompanied by different musical instruments such as tabla, flute, shehnai, dholak, damroo, nagara, thali, dhafli, etc. These musical instruments are also played to celebrate weddings as well as other auspicious occasions.

Languages Spoken by Majority in Hamirpur 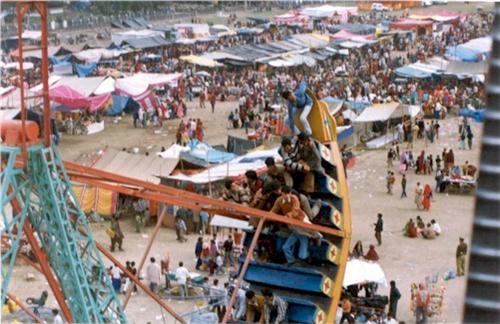 Hamirpur is also renowned for its colorful fairs. Some of these are organized by the government while others are organized by private entities. Popular among the state organized fairs are Hamir Utsav and Hoil Fair of Tira Sujanur. Hamir Utsav is generally celebrated in October-November. Recital of jatras and jheras make this occasions all the more interesting. Dances too are part of this program.

On the other hand, holy is celebrated on the Phalgun Purnima, in the month of February/March. The festival’s cultural splendor is augmented by different mythological tales, songs and dances. Indeed, the festival not only celebrates the eternal love of Radha and Krishna, but also the triumph of good over evil.

Some other famous fairs organized in Hamirpur are Baba Deotsidh, Gasota Mahadev, Ghasian Fair, Chaniary Fair, Awaha Devi Fair, Tauni Devi Mela, Sair Fair, Piplu-ra-Mela, Baggi Melaetc. All these fairs are the outcome of the people’s deep rooted faith in divinity. However, they also have commercial importance for the people of Hamirpur. Contrarily, cattle fair organized by the state in places such as Dhirara, Jahu and Chakmoh are important from commercial perspective; they do not have any religious sanctity.