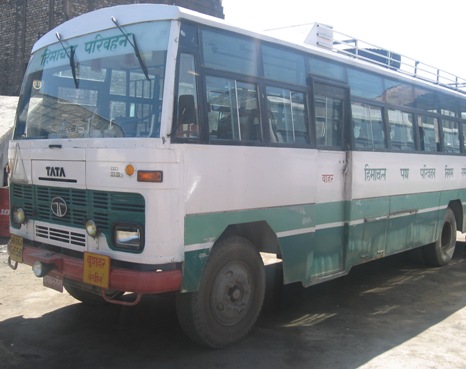 Although Hamirpur does not have any railway station or airport, transportation is never a problem for the residents here. A fleet of buses run by Himachal Road Transport Corporation as well as some private agencies take care of all their needs.

One must remember that Hamirpur is located at the junction of two important national highways; i.e., NH 88 and NH 70.  Moreover, it also has HP SH 32 and HP SH 39 running through it. Consequently, along with buses that originate from here, the town also has a number of long distance bus services running through it. For instance, the buses that run from Shimla to Chamba or from Shimla to Kangra invariably make a stop at Hamirpur. Himachal Road Transport Corporation, a state government undertaking, runs most of these buses.

HRTC owns different categories of buses. Among them the VOLVOs are generally meant for long distance travel; they are comfortable, but cost a little more. Those categorized as Ordinary also travel long distance, but they are generally confined within the boundary of the state. Moreover, these buses are more affordable. For example, a trip from Hamirpur to Shimla by HRTC Ordinary bus will cost as little as Rs.180. However, the fares may go up any time. In addition, to these two categories, HRTC also runs Deluxe, Semi Deluxe and Mini buses (JNNURM).

The fair structure of HRTC buses is most reasonable. In spite of that, the corporation offers concessions to various target groups. First one is aimed at children below five. They can travel free of charge provided they agree to share seats with their guardians. For children between the age group of five and twelve, HRTC provides fifty percent concession. They are however, allotted proper seats.

Other than that, HRTC also offers three other discount schemes. The first one is group discount. Ten or more people travelling in a group can avail 10% discount. The second is Smart Card Scheme. Ordinarily the scheme allows the card holder 10% discount; but senior citizens get 20% discount under the same scheme. However, one has to buy such cards for RS 50. The card remains valid for one whole year. The third is the Yellow Card Scheme, aimed at daily passengers. Under this scheme, one can travel within a radius of 40 Km from chosen point at a discount of 20%. The Yellow Card is also available for RS 50 and is valid for one year. To avail such discounts, one has to contact any of HRTC’s booking centers.

Interstate Bus Routes to and from Hamirpur

Bus routes that originate at Hamirpur:

Following are some of the important interstate bus routes that originate at Hamirpur:

Buses that pass through Hamirpur:

Following are some important interstate bus routes that pass through Hamirpur

A number of intrastate buses also ply through from Hamirpur. Some of the popular destination towns are Shimla, Una, Kangra, Dharamshala, Palampur, Keylong, Sundar Nagar, Mandi, Kullu, Manali, Kalpa, Rampur, Bilaspur and Chamba etc. One can book tickets for most of these cities in advance and that to online.

Since Una is the nearest railhead, bus service from Una to Hamirpur is of prime importance. Fortunately, this service is available almost on hourly basis even in the middle of the night. For instance, the last bus to leave Una is the Haridwar- Palampur; it leaves Una at 11:40 PM and reaches Hamirpur at 2:40 AM. Next is the Chandigarh-Hamirpur; it stops at Una at 12:40 AM and reaches Hamirpur at 4:15. In between, there are numerous buses that ply between these two towns. Therefore, whenever one reaches Una; he/she will definitely find some conveyance to reach Hamirpur. As we have said, transportation is not a problem in Hamirpur.